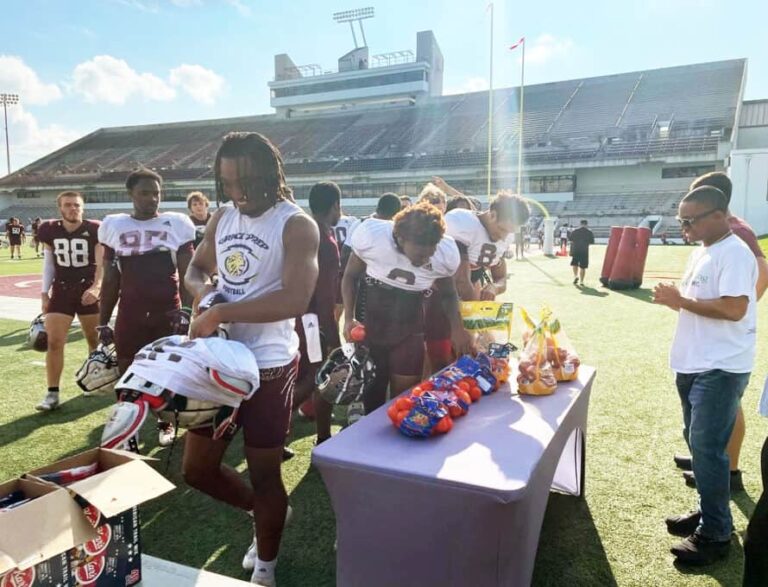 SPRINGFIELD – A year ago, a series of God-ordained happenstance meetings led to the Baptist Student Union (BSU) at Missouri State University (MSU) partnering with local churches to feed the football team a meal every Sunday. Campus missionaries David Stone and Chris Wilson looked forward with expectancy at what God could do with that opportunity.

One year later, another divinely orchestrated meeting has allowed them to build off those efforts. Stone met Brad Snow, MSU’s director of athletic and marching bands, at the student orientation and registration this summer. Stone, a self-proclaimed former “band nerd”, told Snow how the BSU had been serving the football team and hoped to do the same thing with the band.

Snow grew excited. He told Stone the BSU had been his solace and his home-away-from-home during his college days. Stone and Snow began to dialogue about how to serve the band and color guard, which together are comprised of almost 300 students.

Stone suggested serving meals at band camp before the semester began, but Snow didn’t want the BSU to get lost among the noise of all the other groups who feed the musicians during those weeks. He advised establishing an ongoing rhythm throughout the semester. They decided to provide snacks for football players and band members after practices and rehearsals. This would be more manageable and sustainable than providing full meals for hundreds of students. The first time they provided snacks after rehearsals, Stone had a captive audience of over 300 students as he introduced the BSU over a microphone and shared why they were doing what they are doing.

Handing out snacks has become a way to build familiarity with the students. Stone and Wilson see football players and band members across campus. “You see them at the store, the dining hall, the bookstore,” Stone says. “You can stop and have conversations.”

Historically, the BSU has primarily operated out of its building, but this year, with no usable facility for the first time since 1956, they’ve been forced to move on campus, a change Wilson sees as being “a good reminder of how critical it is to be on campus.” A couple weeks ago, he was approached by one band member who asked if he was Chris. The student went on to say that Milton Baumgardner, a long-time pastor in Hannibal, told him he needed to find Wilson and talk to him once on campus. “This was 3-4 weeks into the schoolyear,” Wilson says. “When was he going to come talk to me if we hadn’t been on campus?”

Handing out snacks has replaced the traditional weekly meal that most BSUs do in their building. “Weekly we were trying to get kids to come to our place,” Wilson says. They would have twenty kids one week, then a hundred another week, which provided stress for the churches trying to plan and bring meals. “Now, we’re there,” he says. “We’re giving snacks and drinks to football players on the field directly after practice. It’s a consistent number, it’s right there. We’re coming to them. Same with the band, right on the rehearsal field.”

Just as churches typically provide food for BSU meals, churches are partnering with the BSU to provide grab-and-go snacks and drinks. Church members in their 80s have stood on the field handing out snacks and meeting students. The church partners for this semester include Harmony Baptist, North Bridge, River Bluff, Golden Avenue, FBC Springfield, and FBC Battlefield, as well as the Greene County Baptist Association.

Wilson has also invited other churches that don’t have the resources to provide the snacks to come, hang out, and build relationships with the students. “It’s a joint effort to share the gospel with the players and band members,” he says. Greg Gaumer, church planter with Redeemer Church, comes regularly and has gotten to know the coaches. “We’re not by ourselves trying to share the gospel with them,” Wilson says.

At this stage, Wilson says they’re doing “a lot of seed planting.” Though the fruit is not always immediately apparent, he and Stone believe they’ll get to see the harvest. One football player recently came to know Christ, led by Coach Consiglio, the coach who originally connected the BSU to the football team last year. Though Consiglio led the player to Christ, God alone knows how much the BSU’s ministry influenced his understanding of the gospel and his desire to accept it.

Wilson meets regularly with three of the defensive linemen, usually once every couple of weeks. He and Stone hope that over time, those kinds of relationships with band members and players will develop, grow, and ultimately lead to gospel conversations.

In the meantime, they don’t underestimate the power of their presence in the students’ lives. At the first home game this fall, Stone went down by the gameday locker room after the game. The three defensive linemen that Wilson meets with came out together. One introduced Stone to his family, who was in from St. Louis for the game. “I gave them my card and explained that Chris couldn’t be here,” Stone says. “I said we just try to put our eyes on things, and if they ever need anything or need to get ahold of him, just let us know.” The player’s mom teared up at the knowledge that there were people on campus looking out for her son. “That’s a powerful thing when they know that there’s a stable person in their life,” Stone says.

Editor’s Note: This article was originally published in The Pathway, a publication of the Missouri Baptist Convention. Republished with permission.

Britney Lyn Hamm is a writer, editor, and designer. She is the author of one novel with another in progress and the editor and designer of four published works including a devotional, two children's books, and a nonfiction book. She writes regularly for MBCollegiate and The Pathway. She and her college ministry husband reside with their five children in Kansas City.