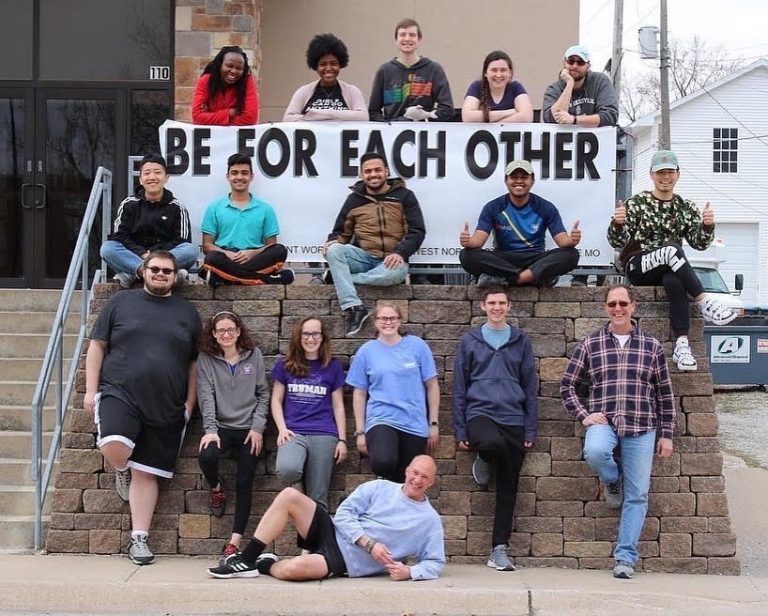 Just before the COVID-19 pandemic shut down the country, the Truman State BSU spent their spring break showing the love of Jesus in Indianapolis from March 8-13th. Serving together proved an opportunity not only to proclaim the gospel to those they were serving but also to those who served.

Over the course of 5 days, they served at several food banks, helping give food to over 800 people in one day, sorting and organizing 10,000 pounds of food, and unloading an entire Frito Lay’s semi-truck. They also helped a local ministry rehab a house that will be used to house women coming out of prison and teenage homeless. Their efforts saved the ministry over $6000 on a new sewer line.

The group of 17 was made up of several students from the BSU, an agnostic student who has been hanging around them, a few Korean Christians, a few Muslims, a Buddhist, a Catholic, and a pastor and his youth minister. As they labored side by side, cooked and ate together, and roared with laughter while playing group games in the evenings, it became evident that God was on the move in the hearts of many students. Campus Missionary Greg Xander was hearing of “really meaningful conversations, from students sharing about wanting to find healing in broken relationships with family, to guys of different faiths talking about God at two a.m.,” he says.

On the last night of the trip during their daily worship and sharing time, walls came tumbling down. For over three hours, they experienced an outpouring of worship, sharing, encouragement, and prayer. “There were tears…many were feeling they were not doing well, and they were struggling to find hope,” says Xander. “What we did not see coming is that the ones who shared the most were not believers in Jesus. That was so unexpected and allowed for many to share encouragement and hope in Jesus.”

The next morning, the group packed up and headed back to Kirksville, MO. On the bus ride home, the agnostic student gave his life to Jesus. After months of God showing His love to him through the BSU, he proclaimed his newfound faith in Jesus to the group in the middle of the BSU building when they arrived.

The testimony of a new brother in Christ is a motivation for Xander “to continue making disciples of so many who went but have not trusted Jesus yet; of this guy who is now alive and wanting to live for Jesus; of the ones who are believers and are trying to grow in Him,” he says. “There are jobs to be done.”

Britney Lyn Hamm is a writer, editor, and designer. She is the author of one novel with another in the works. She writes regularly for MBCollegiate and The Pathway. She and her college ministry husband reside with their four children in Kansas City.
PrevPreviousBSU Ministry at NCMC Thrives During COVID-19
NextWMU’s Prayer and Service is Backbone of the Missouri State BSU MinistryNext