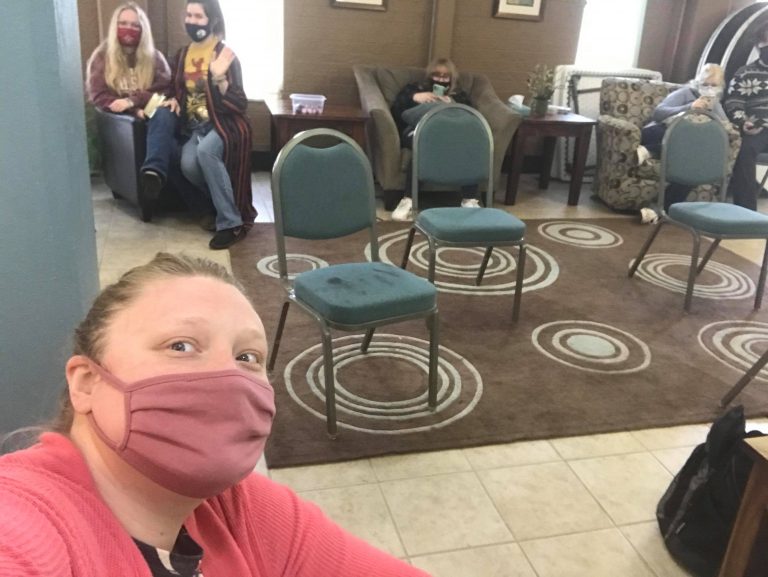 Editor’s note: this article was originally published on May 5, 2021 in The Pathway, a publication of the Missouri Baptist Convention. Republished with permission.

TRENTON, MO – The decision to get an on-campus gym membership was a personal one, not a ministry one: Campus Missionary Christina Boatright wanted to build healthier habits for her overall wellness. The on-campus gym at North Central Missouri College, which is open to the public, just made sense. Three months later, that seemingly personal decision has led to a bountiful ministry harvest. “God was like, ‘let’s just throw some extra on that,’” Boatright says.

One of Boatright’s BSU student leaders, Trinity, wanted to go with her to workout. They started exercising in the afternoons, and Boatright used the time at the gym to mentor her. Soon another BSU student, Delaney, joined in, and later a student named Aubrey, too. Boatright continued to pour into the girls as they worked out.

The time they chose to go to the gym each day happened to be the time when the sports teams worked out and practiced. Delaney had connections to some of the ball players, so they started talking to the athletes. Before long, athletes were coming to the BSU’s free Wednesday lunches. A couple of them asked about the Bible studies. A basketball player and baseball player started attending their Thursday Bible studies. They invited more ball players. Soon they split into two separate studies on Thursdays given the number of students and their practice schedules. The need quickly arose for a third Bible study on Tuesdays.

Boatright looked for other ways to further her relationship with the teams, serving a homemade lasagna dinner to the

ladies’ basketball team after a home game and giving the basketball team gift cards to the local grocer. She gave swag bags to the softball team and put together care packages complete with energy drinks, bubble gum, jerky, and sunflower seeds for the baseball team.

When asked why she does it, Boatright doesn’t shy away from the truth. “Because we love you guys, and we love Jesus,” she tells them. She and her BSU students have gotten to share the gospel with several athletes who don’t know Jesus.

The softball team even invited her to come over during practice to share whatever she wanted to share. She talked about why the BSU exists, what they do, and why she loves the sports teams.

Her love-loaded actions toward the teams won her a solid reputation among the athletes and their coaches. They know her face and what she’s about. They know they can depend on her. One day, a coach announced as she walked by in the gym, “That’s Christina. If you need anything, go to her, and be respectful.” Another coach thanked her for her gifts to the team, saying, “You have no idea how excited we are. We appreciate everything the BSU does for us on campus.”

Since the start of the spring semester, God has led all three girls Boatright works out with to sign up to be summer missionaries this summer. Two will intern with her and one will do mission in Montana. Delaney, who is only a freshman, has started meeting with students at her house doing Bible studies. Boatright is working to recruit several athletes to work with Sports Crusaders this summer.

A simple act of obedience can yield profound Kingdom results – if we have eyes to see the opportunities and courage to respond to them, which Boatright has done. “I didn’t know that me working out would become such a huge ministry outreach,” Boatright says. “It wasn’t something that I planned.

But she’s not arguing with the results.

Britney Lyn Hamm is a writer, editor, and designer. She is the author of one novel with another in progress and the editor and designer of four published works including a devotional, two children's books, and a nonfiction book. She writes regularly for MBCollegiate and The Pathway. She and her college ministry husband reside with their five children in Kansas City.